It’s true what they say – the first trimester is rough. From being exhausted, to colds that you can’t treat with medicine, to morning sickness kicking in strong…it’s already been a ride and a half.

All of those hurdles make it difficult to enjoy being pregnant, which is why I’ve found it’s important to keep my eyes on the prize. As you may well know, we tried hard to get pregnant. Day to day may be difficult right now, but overall I’m not going to let some sickness get me down.

The best part about the first month is that most of it passes without you being aware. After all, you don’t even conceive until about halfway through the month! Most women won’t know they’re pregnant until closer to 4 weeks, probably actually somewhere in the 5th week (after their missed period).

Despite the fact that I kept telling myself I would no longer test early – a definite way of setting yourself up for failure if you’ve been trying for awhile like we had been – for some reason I felt compelled to test a full two days before my missed period. Luckily this time it worked out for me.

The rest of the month wears spent tired but elated.

This is when things took a turn. Unfortunately during the last week and a half of the previous month, Mr Anderson had brought home a cold and I’d been nursing him through that. Which then of course meant that I caught his cold. 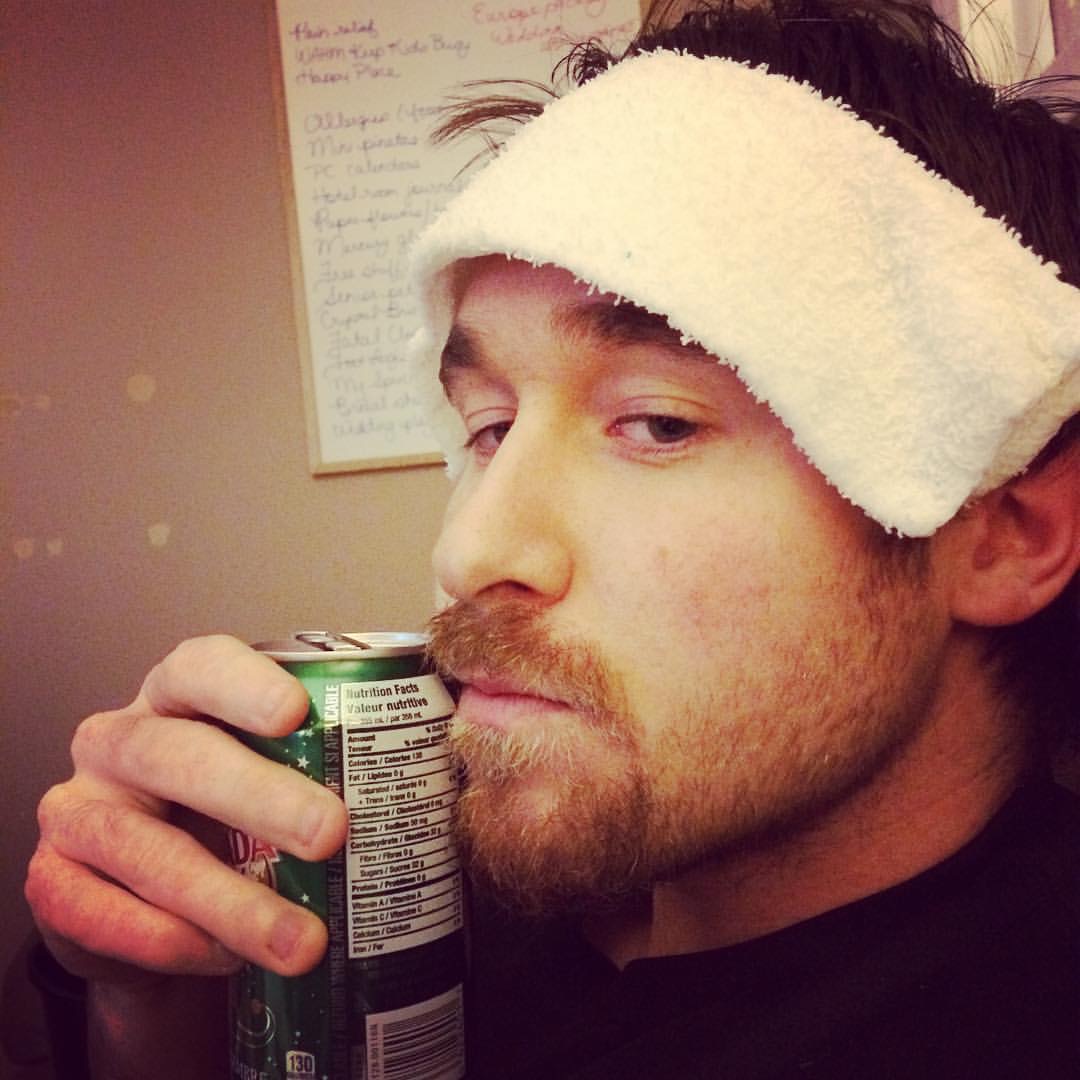 Let me tell you, being 5 weeks pregnant and laid up with a cold is horrendous. I felt miserable, my already-existing exhaustion only got worse, and I was so stuffed up I could barely breathe (I’m not a mouth-breathe, I find it very uncomfortable). My sinuses were so painful, I had to sleep propped up and with warm, wet compresses covering my face. The only “medication” I could take was saline nasal spray – a godsend, to be fair, but not entirely the relief I needed.

The I got over my cold, my morning sickness started. I was textbook, starting bang on at six weeks along.

I had my first midwife appointment during the eighth week and mentionined it to them. At that point I was vomiting twice a day with an extra special dry-heaving sessioin at midnight every night. I was existing almost entirely on soda crackers, ginger ale, and Pizza Pops. (I know, right? So much for my amazing Pregnancy Diet.) My midwife said that as long as I could keep something down, especially my prenatal vitamin, she was happy.

She offered me diclectin, the go-to morning sickness prescription, but I was very anxious about taking any medication during pregnancy, especially the first trimester. A few days later, I was done. I sent Mr Anderson running to grab my prescription ASAP.

Valentine’s Day came and went largely unremarked. I didn’t have the energy or desire to go anywhere or do anything. To his credit, Mr Anderson bought me a beautiful necklace with three hearts – one for each of us plus a teeny tiny sparkly heart in the middle to represent our growing life. I was honestly so touched by such a meaningful present that I cried. A lot. 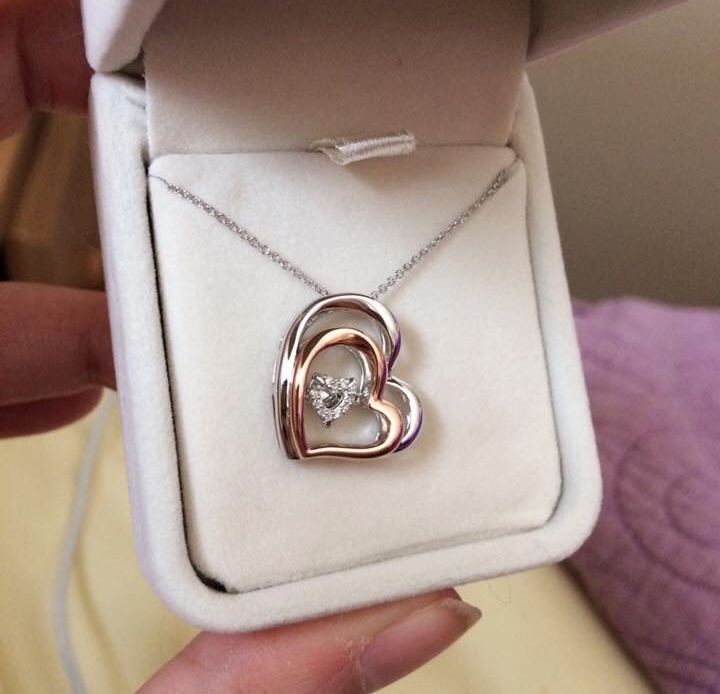 I had a midwife appointment two days shy of being a full 12 weeks along, but baby was still too little to hear the heartbeat. The next day, I had my first ultrasound and the blood draw for the IPS.

I can’t express what a huge relief it was to finally see our little one! Seeing them squirm and wiggle and suck their thumb – seeing the heartbeat, especially – was a huge weight off my shoulders. We’d done it, we’d made it to the much-lauded 12-week mark! We could breathe (somewhat) easy.

A few days later we finished making the rounds announcing it to our families and friends and could finally shout it from the rooftop (aka announce it on Facebook). 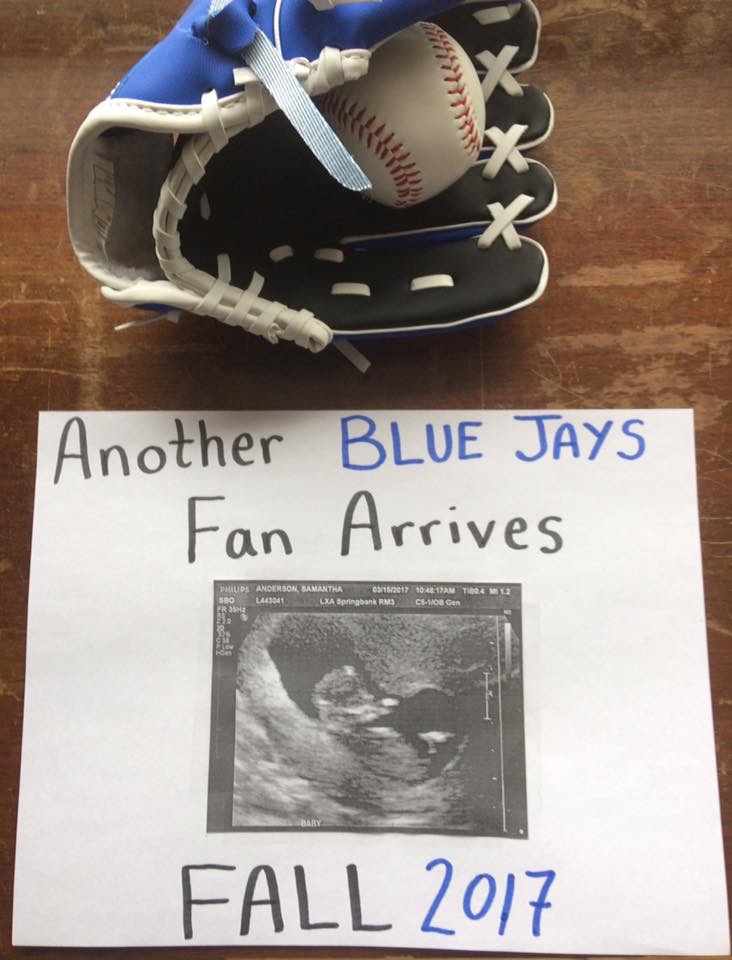 Other than those highlights, the month was a blur. Until midway through week 13, when I finally started weaning myself down, I had to be on the maximum dose of diclectin. Even on that dose, I was still a mess. There were times I called Mr Anderson in tears because I’d tried to roll over to get my bucket or get up to go to the bathroom but wasn’t able to do so before vomiting all over myself. The diclectin also made me have that drugged-up exhaustion. If I wasn’t asleep, I was probably half-comatose in bed anyway.

Thankfully, but the end of the 13th week, I’d essentially weaned off diclectin and was slowly able to eat slightly more food each day.

How was your first trimester? Share your experiences in the comments, we’d love to hear them! (Especially share any pro tips to help other women survive these brutal three months!)